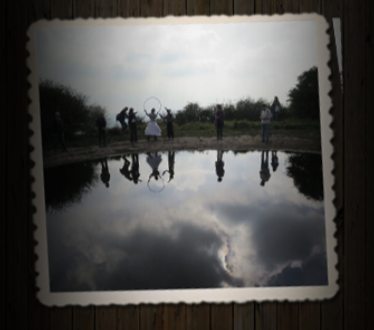 A contribution to the Gifts book by Clare Whistler, part of her art project Gifts

I once spent a summer living in a castle of books, in Paris, on the banks of the Seine. The bookstore was called Shakespeare & Co, and upstairs was the Tumbleweed Hotel – whose motto was ‘Be not unkind to strangers, lest they be angels in disguise.’ The creative mastermind behind the place was George Whitman, a mischievous and cunning American from Salem, Massachusetts who claimed to be the long-lost grandson of Walt Whitman. The bookstore was a kind of tourist attraction – but not all visitors discovered the rickety wooden staircase at the back, which led to the rare book library. Among the dusty books, sometimes passing unnoticed, was a series of beds with faded velvet covers – more likely than not, inhabited by bedbugs. Travelers (especially aspiring writers) were welcome to stay awhile at the bookstore. On arrival we had to write a one page autobiography, and provide it to George, who collected them all. And we were supposed to read a book every day, as long as we stayed.

George didn’t believe in banks. He would stash large wads of cash in the books, then forget where he put them. Sometimes he’d grab a customer and yell ‘Mind the cash!’ and install them at the cash register, while he dashed out of the store. George came to Paris on the GI Bill after World War II and spent all his money on books, which is how the bookstore grew up around him. Every Sunday he made cardboard-tasting pancakes, and hosted a tea party-salon in the afternoon. He was a romantic, a madman, and a genius, and his strange literary wonderland was a gift and a provocation. It was probably my first experience of ‘living in the gift’, a place outside the logic of market exchange, where strange, magical and insane gifts circulated in unexpected ways. Years later I came across a book called The Gift by Lewis Hyde, and it all made sense, in a different way.

There was an external gift economy – George’s extraordinary gift of hospitality to us. There was the gift of the books themselves, available to circulate among us, passed from hand to hand. But beyond that, there was the encouragement to develop our own gifts, as writers and creators. I would debate with George as I wrestled with existential questions, like books vs. life: how many hours a day does it really make sense to spend reading, when there’s so much life to be lived? He told me books allow us to live multiple lives, experience things we otherwise never would. ‘I’m reading Martha Gellhorn’s biography,’ he’d squint at me, looking up from his book, ‘to understand you better…’ a sly, teasing challenge. In the end, I became not a writer but a documentary filmmaker, living multiple lives not through reading, but vicarious experience.

But I never lost my love of books. Now I find myself adapting The Gift into a feature-length documentary and crossmedia project. Along the way, Lewis Hyde connected me with Clare, and her beautiful Gifts project. We began a conversation around Gifts, and she became one of the collaborators on Gift-it-Forward, the interactive project we’re creating. Across the ocean in Canada, I still haven’t had a chance to meet Clare or experience her Gifts in person… but the quality of lived experience and exchange, I find intriguing and enchanting.

He gave me a Reese’s peanut butter cup, and yelled at me for staying away so long.